A new study has confirmed that the adoption of hands-only CPR has made bystanders more likely to perform CPR on someone in cardiac arrest. Because receiving any form of CPR doubles the odds of surviving a cardiac arrest, this is excellent, lifesaving news! 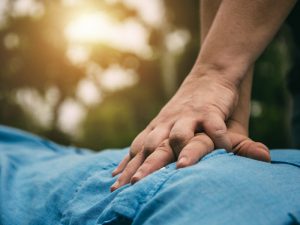 Hands-only CPR became more widely known and accepted after 2015, when the American Heart Association (AHA) guidelines included the option in its CPR guidelines. Now, instead of requiring both chest compressions and mouth-to-mouth rescue breaths, bystanders can choose to only perform compressions until medical help arrives.

This may seem like mixed results, but those numbers indicate a significant increase in bystander CPR performance rates. The numbers increased  from 40.8 percent in 2000-2005 to 68.2 percent in 2011-2017. And although this survey was performed in Sweden, recent research has shown similar increases in the United States.

According to the AHA, more than 325,000 cardiac arrests occur outside of a hospital setting every year in the United States. Receiving immediate CPR keeps the blood flow active until medical help arrives on scene. This more than doubles the odds of survival!

Do you want to be a lifesaver? Sign up for a HeartCert CPR class today.

HeartCert CPR is your trusted training partner for First Aid and CPR in the Twin Cities and throughout Minnesota. We now offer online, night and weekend classes to fit your busy schedule!

We also have three partner locations in greater Minnesota:

Why Should I Become a CNA?